Following the major accident in Chile on the morning of Saturday March 12, we are delighted to announce that a fully repaired Ed Force One will take off tomorrow afternoon, Tuesday March 22, from Santiago Airport to rejoin the tour at Brasília Presidente Juscelino Kubitschek International Airport. Following the show at Nilsen Nelson Arena, the plane will be loaded up once again on Wednesday with over 20 tons of equipment and our tour personnel to fly to Fortaleza for the concert on Thursday and on from there to Sao Paulo then New York and onwards round the World on The Book of Souls World Tour which visits 36 countries in the five month period.

The accident required the replacing of both of  the Boeing 747’s  port side jet engines, a tough proposition at the best of times but not made any easier by the fact of the distances involved in getting such huge components, parts, tools and technical crew to Chile as quickly as possible to get Ed Force One back in the air. The engines alone weigh 5000kg each, and cost around four million dollars each.

Ed Force One is leased from Air Atlanta who went into immediate action following the incident, with technical assistance from Boeing. An emergency meeting on the Sunday was called to create a comprehensive detailed plan for this complex operation – locating suitable engines, thrust reversers, cowlings and parts, working out necessary tooling and technical team, logistics of ground and freight transport and tech team travel and a myriad of other detail. All from scratch. The next couple of days were spent putting these plans meticulously into place.

The result was that on Thursday last, March 17, a Cargolux chartered 747 freighter left Luxembourg carrying two huge replacement jet engines, trucked there from Hannover, Germany. The Charter stopped over at Stansted Airport, Essex, UK to collect two more consignments. Cowlings and thrust reversers were trucked there in huge boxes from Kemble, UK, along with tooling and consumables flown in specially from Jeddah to Heathrow and hauled to Stansted.

The engines were cleared by Chilean Customs Friday lunchtime and they were transferred to the LAN Chile maintenance area of the airport arriving just before 2pm.  Working in shifts 24 hours a day the techs were then able to start removing Engine number 1 and then on Saturday Engine number 2.  Using hoists and cranes the damaged engines had to be detached then lowered into a cradle in order to swap with the new replacement engines.  The replacement engines were then lifted up and into a place.  Once the support pylons had been inspected and x-rayed and damage assessed, both of which passed with flying colours, then the new engines were attached with, as one of the techs said, a “ million” wires.  Both were finally in place and attached by Sunday lunchtime and then the thrust reversers fitted overnight, almost as complex an operation as fitting the actual engines due to being right under the wing.  Final piece of the jigsaw was for the Eddie decals to be fitted and then both engines tested by running to full power.

Comments Bruce Dickinson, Maiden vocalist and pilot of Ed Force One:  “The speed and thoroughness of this incredibly complex operation was stunning and we are so very pleased to get our plane back! We would like to thank Air Atlanta and their terrific rescue team for a fantastic effort in achieving this in the time they did, and to Boeing, LAN Chile. ACS and Rock It Cargo for all their invaluable support.  We are sorry though for our fans in Cordoba, Buenos Aires, Rio and Belo Horizonte who missed out seeing the plane, but we hope they enjoyed the concerts as much as we did.

We should also thank our Killer Krew who found themselves at lunchtime on the Saturday of the accident with over 20 tons of equipment at the airport in Santiago and over 60 people all to get to Cordoba for early the next day to set up the huge show we are carrying. The distance is “only” 1000km, but with a small matter of the Andes in between! They did it , by the skin of the teeth, and all went very well for the show in Cordoba and the other three cities Ed Force One just missed. It’s quite a feat of logistics to  find and put into action at such short notice all the transport, replacement air-charters, schedule flights etcetera to enable us to play those next four shows on time without Ed Force One, our transport for everything. Great effort, team, many thanks from all of us. And to our promoter MOVE and ACS for all their assistance and time with this too“ 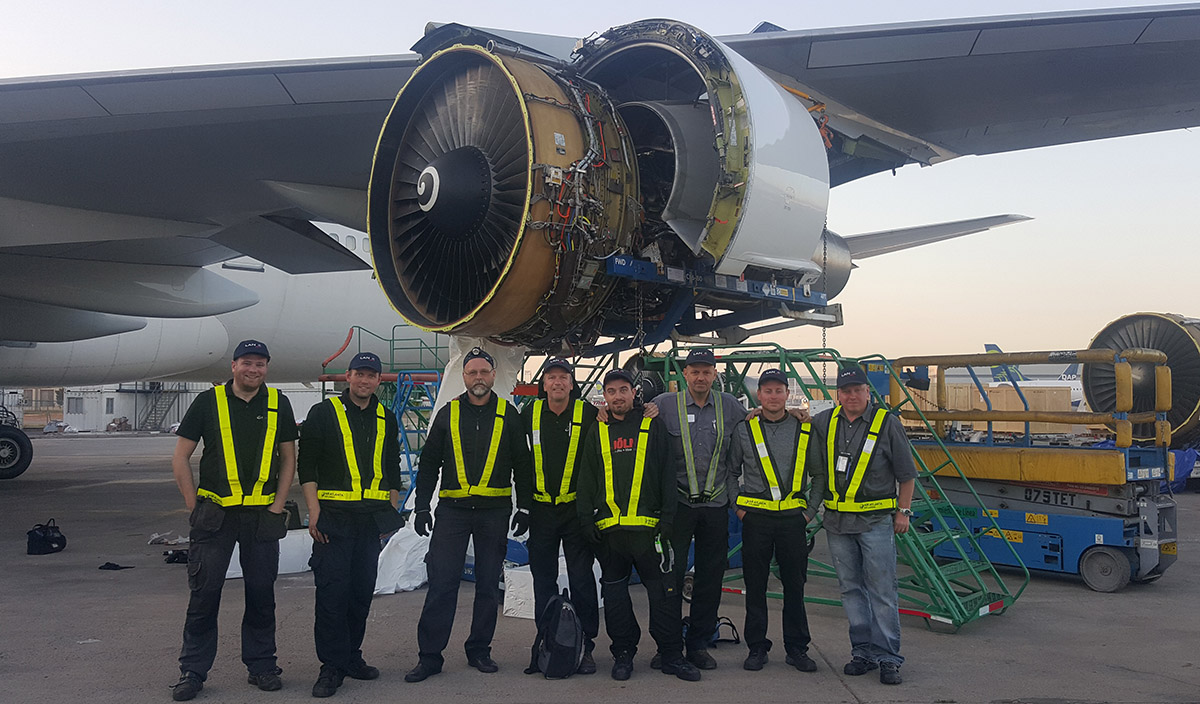 Air Atlanta tech team who fixed Ed Force One, by shifts they worked: