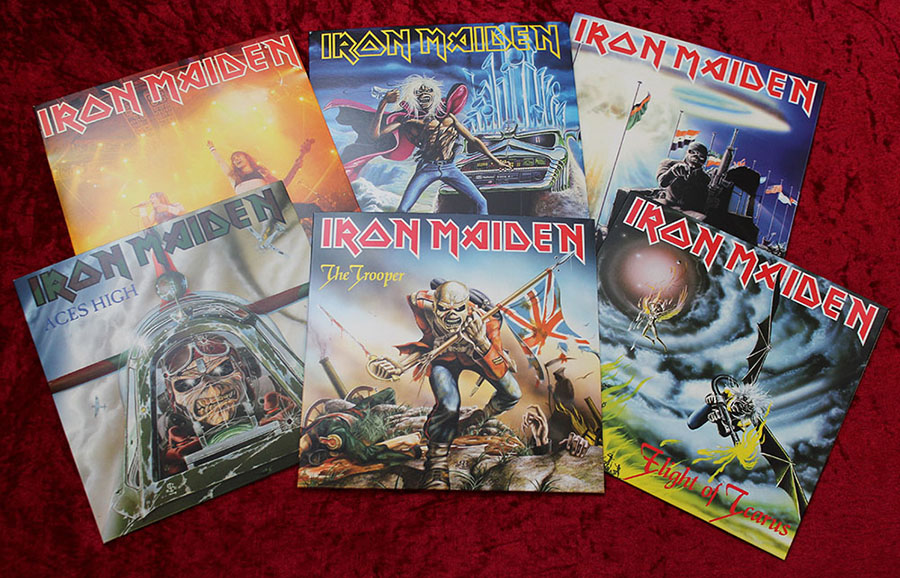 11 April 1983 - Flight Of Icarus
This single was released a couple of weeks prior to the band embarking on their World Piece tour in support of the Piece Of Mind album, the first to feature Nicko McBrain on drums. In the promo video Nicko appears as a blue faced grim reaper. Also, producer Martin Birch has a cameo in the clip as his face morphs with Eddie

20 June 1983 - The Trooper
The B-Side is a cover version of Jethro Tull’s “Cross-Eyed Mary” and without any involvement from band or their record label it picked up radio airplay in the US. It was one of the only songs Maiden ever had played on US radio back in the ‘80s. Due to this unique success on radio, the record label asked for the track to be added to the Piece Of Mind album. The band refused as it would be unfair to the 250,000 fans who had already bought the record.

6 August 1984 - 2 Minutes To Midnight
2 Minutes was released the same week the band opened their longest tour to date - the World Slavery Tour. This began on Aug 9th with the band’s first visit to Poland. Maiden were the first major band to take a full Western rock concert production and tour extensively behind the Iron Curtain in 1984 playing 5 shows in Poland and 2 shows in Yugoslavia at the height of the Cold War at a time when East-West relations were at their frostiest.

22 October 1984 - Aces High
The newsreel Spitfire footage in the promo video for this song was unquestionably surpassed by the REAL Spitfire that flew across the Download Festival crowd on 15th June 2013 just before Maiden took to the stage on their record-breaking fifth headline slot at Donington Park.

23 September 1985 - Running Free (live)
This live single was recorded at Long Beach Arena in LA during the ’85 leg of the World Slavery Tour and was included on the Live After Death album released the following month. It was the first Maiden single to feature any of the band on the cover rather than an Eddie artwork.

2 December 1985 - Run To The Hills (live)
This live single was also recorded at Long Beach Arena in LA during the ’85 leg of the World Slavery Tour and is taken from the Live After Death album. The early pressings of the original 7” single included an “autographed” xmas card from the band, now a collector’s item.


More random facts with the final batch of vinyl!